YAY! We’re back to one of my recurring favorite “monsters”–the shapeshifter. This was one of my favorite episodes, one I watched over and over and well, you get the point. I mean, there’s this:

Just for starters. 😉 We begin with a recap of the last episode in which we mentioned the Winchesters’ trouble with the law, The Usual Suspects. The recap is interrupted by a breaking news bulletin. There’s a hostage standoff situation at a bank in Milwaukee. One of the hostage-takers steps out of the bank to release a hostage. The news cameras zoom in…holy crap!

Rewind to one day ago and Dean’s posing as an FBI agent, “investigating”  and flirting with a young woman at a jewelry store. Sam is interviewing the jewelry store owner. It turns out the store’s head buyer stole a bunch of diamonds, killed a security guard and then herself. It seems very strange and very out of character. Our boys want to see the security footage but the police took it already. They’ve also found out about a longtime employee who robbed a bank, then killed himself, just like the jewelry store buyer. They go see Ronald Resnick, the night watchman and witness who gave a statement to the police that his friend Juan didn’t rob the bank. His apartment is littered with alien and conspiracy articles so the guys are a little iffy about his story. Ronald says “The thing I let into the bank wasn’t Juan.” He thinks that what he let into the bank was a mandroid. He shows them the video footage where Juan has “laser eyes.”

Ronald’s theory sounds a lot like shapeshifters. Dean is excited but Sam tells Ron his friend robbed the bank and that’s that. The next day, the guys pretend to be with the security service, doing a routine check of the bank’s cameras. They’re really looking for the shifter among the employees and customers.

Sam thinks they may be wasting their time but then they spot the guy. “Hello, freak.”

As they’re getting ready to confront the shifter, Dean spots someone else on the cameras. Ronald has locked the doors and busts into the bank with an assault rifle. “This is not a robbery!” he exclaims as he fires warning shots into the ceiling. He’s got his own plan for stopping the shifter/mandroid. Not a very smart one.

Dean and Sam try to talk him down. He asks if they’re working for the men in black or the mandroid. LOLz He asks one of the hostages to frisk the guys and finds the silver knife Dean sneaked in. Ronald knew they weren’t FBI but still doesn’t trust them. Dean tells him they believe him and the shifter is the bank manager. 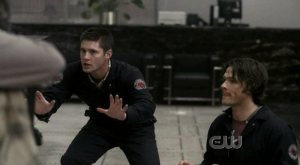 Dean talks him into taking him as a hostage to find the shifter. Ronald agrees but locks everyone else, including Sam, in the vault. Ronald and Dean check the manager’s office and find his shed skin. Ewww… 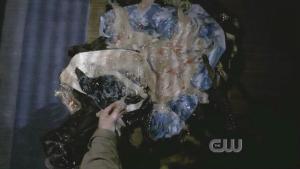 They set off to find who the shifter has changed into now. Meanwhile, a major police presence has arrived outside the bank. Inside, they’re unaware that the police know what’s happening. The cops cut the power to the bank. Ron is happy at first because he was right, at least partially. 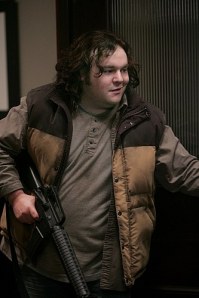 In the vault, one of the employees is gushing to Sam about what a hero Dean is, until Dean comes back, armed, and puts more people in the vault. He gets Sam out, leaving all the employees and possibly the shifter inside. Sam sees the massive police presence and is worried. Dean is still wanted by the police, after all. Things aren’t looking too good for our boys.

Dean leaves Sam with Ron while he goes to search for the shifter. Sam opens the vault door for the people inside. The phone rings and unfortunately, Ron answers. Sam makes him hang up. One of the hostages, the security guard, seems to be having a heart attack so Sam calls the police back and asks for a paramedic. Dean finds the body of who the shifter has turned into, one of the people in the vault. Sam tries to get the guard out while Dean goes to take care of the shifter but the shifter is onto them and runs. While they’re distracted, Ron has wandered in front of the light and a sniper’s sight is on him. Too late, Sam sees this and the sniper shoots Ron. 😦 Poor guy. He’s a goner. 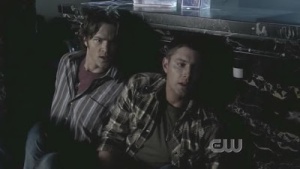 Sam asks Dean to take the guard outside and he’s going after the shifter. The employees have run out of the vault so it could be any one of them. Great. Dean takes the guard outside. “One of the hostages. He seems to have taken over the situation,” the cop tells the guy in charge. Now, Dean’s been on TV and the cops know it’s him. Super great. “We are so screwed,” he says to himself as he relocks the door after getting the guard safely out.

Sam finds that it has shed its skin. Again. Meanwhile, the feds have arrived. Enter Hendrickson. ❤ him 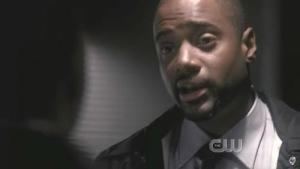 The cop in charge, Robards, tells Hendrickson this isn’t going down like a usual heist. Hendrickson says, “That’s because it isn’t one. You have no idea what you’re dealing with, do you? There’s a monster inside that bank, Robards.” Whaaa? He knows?

Dean locks the other hostages back in the vault, telling them it’s gonna be all right. The phone rings and it’s Hendrickson. He knows Dean. He says he wants Sam and Dean to come out, unarmed. He’s been looking for Dean for weeks and knows everything about them, even about Dad. Oh crap.

Hendrickson tells Dean he and Sam have one hour to come out before they come in, guns blazing. When Hendrickson hangs up, he tells Robards they’re going in five minutes. Sam finds the shifter’s next meatsuit: it’s Sherry, the one who was sweet on Dean. But when they bring her out and she sees her own body lying on the floor, she passes out. Huh? 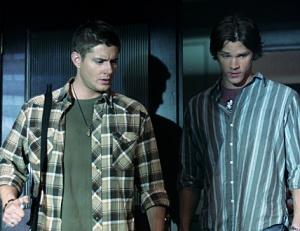 Dean starts to stab her with the silver knife anyway but Sam stops him. “What’s the advantage to this plan?” They figure the body lying on the floor with its throat cut might be the shifter. There’s a crash elsewhere in the bank and then the supposedly dead woman grabs Dean.

Sam gets real Sherry out while Dean chases after the shifter. The SWAT team has burst in and Sam and Dean have got to figure out how to escape, beat the shifter and not get arrested. Sam is so badass that he beats up two SWAT guys on his own. Meanwhile, Dean is getting his ass kicked by the female shifter. Good times. He finally kills her just as a guy in SWAT gear comes in. Uh oh.

But the SWAT team find no sign of the Winchesters. What they do find is two of their guys, unconscious and stripped to their undies locked in a closet. Sam and Dean dressed up as the SWAT guys to escape. Nice! They make it to the Impala…

Why are you guys so pretty? “We are so screwed,” Dean says. Yup. But they’re free to fight evil another day! Next week we have our first taste of what will become a very common Supernatural theme: angels. Join me then!