Maybe I should make these blogs a week later? Once again, here’s a gif that goes with last week’s episode. Icky tasting an energy drink:

Sigh. that’s how I feel about them too, Icky. 😉 Onto this week’s episode! Instead of a dream sequence, we start in a flashback. Icky is aboard a ship at the Boston Tea Party. Icky is told to “man the door” but he doesn’t listen. A Hessian soldier is guarding something. There’s an explosion…and then Icky is giving love advice to the OnStar representative. LOL

His words are beautiful. His voice is beautiful. 😉 “Surviving death, separated by time tests the bonds of love. The moment I saw her, I knew.  The bravest love is born again with each new day, the kind of love… that bewilders with its magnificence.” Oh, Icky. C’est l’amour. Don’t we all wish we were Katrina? A little bit?

So, he thanks the OnStar rep for unlocking the vehicle and showing him how the entertainment center works. 😉 Then Jenny escapes the psychiatric institution and alarm bells go off, picking up where we left off at the end of last week’s episode. The captain is angry Jenny has escaped. He gives Abbie twelve hours to find her sister before he puts a nationwide warrant out on her.

Jenny has gone to a bar where she stashed a bag of weapons. Soon after, a group of strange guys come into the bar, looking for Jenny. The leader is a piano teacher by day, it seems. He’s pretty creepy. 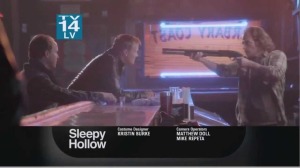 Although he pulls a gun on them, they easily turn the tables and torture the bartender into admitting she was there.

Meanwhile, Icky is still trying to find out more back story about Abbie and Jenny is on the run. Abbie tells him their dad left, mom had a nervous breakdown and the girls were put in foster care. Abbie went to one home, Jenny to seven. in short, she’s had a very tough life.

Icky and Abbie go to see a charming former foster parent of Jenny’s and learn that she used to go up to a cabin by the lake. Abbie breaks in. “Imagine the delinquency we could perpetrate if we really put our minds to it,” Icky says.  Oh, Icky. I am imagining it. 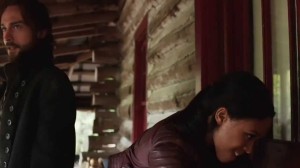 They find that the cabin belonged to Sheriff Corbin. Jenny shows up and there’s a standoff between Jenny and Abbie. “This is awkward,” Icky says. He gets them to stop by telling them to get their heads out of their asses in a cute British way that works. It turns out the sheriff was the only one to believe Jenny and visited her the night before he died. jenny used to obtain rare objects for Corbin.

The last she found for him was a sextent, from the Revolutionary War. Icky tells them the Boston Tea Party was a distraction for him to retrieve it back in the day. The Hessian soldier guarding the weapon took his life to keep the weapon safe. But Icky was the only one to survive and he managed to get it to Washington.

The sextent is a projector of some kind. It shows them a map of Sleepy Hollow from back in Icky’s day. Before they can learn more, the bad guys shoot up the place and take the sextent. in good news, Icky can now fire a gun more than once. 😉 Our good guys capture the creepy piano teacher guy so all is not lost.

Icky sees that the man is a Hessian, like the Horseman.

They keep asking what was in the box and Jenny figures it out. The Lesser Key of Solomon, a book of black magic which can conjure 72 demons. It was found by the Knights of Templar, who have kept it hidden. Now this group of Hessians want to raise the demons, playing their part in the upcoming Apocalypse. Yikes!

He tells them the leader knows all of them, that he appeared to Abbie and Jenny “that day in the forest.” He is getting stronger. His name is Moloch, the demon from the woods. Before they can learn much more, the piano teacher takes a cyanide pill and dies. “Moloch shall rise,” are his last words.

While the sisters argue about whether or not to call in the police, Icky is working on a map, From his photographic memory, Icky draws what the sextent showed them before it was taken. It leads to where the Lesser Key of Solomon is hidden. The bad guys have gotten there first and start raising the demons. (cool, creepy image – maybe there will be a gif of it by next week).

When Abbie, Icky and Jenny race in, the bad guys grab Jenny and threaten to kill her. Uh oh.

Abbie hesitates but the good guys always win. She gets the book and throws it into the fire around the altar. One of the bad guys gets thrown in there, too. Throwing in the book closes the door. “They left without a farewell,” Icky says. “How impolite.”

Back at the station, the sisters talk and seem almost ready to work things out. Abbie admits to Jenny she and Icky are the two witnesses. “And I will give power to my two witnesses,” she quotes. Jenny quotes back Psalm 94:1: “O Lord, the God of vengeance, let your glorious justice shine forth.” Jenny promises to keep punishing her forever, for turning her back. It’s funny and sad at the same time.

“I see who you really are and I’m proud of you,” Abbie says. “We’re all the family we have left. You and me. That’s it.” Reminding me of Sam and Dean. She’s trying to make things right now, to work together. Before Abbie leaves,  Jenny tells her Corbin asked her to forgive and she didn’t know if she could. But at least it’s a start.

After she leaves, Icky tells Abbie about the legend of Moloch, the demon we’re dealing with. Moloch is mentioned in several theological texts, including Paradise Lost. He led a revolt of demons against heaven and was a god with a ram’s head to whom children were sacrificed, according to legend. So now we know why he’s got the horns. The plot thickens!

My only complaint about this episode is there was so much information, it was almost hard to keep up. Perhaps because I’m trying to blog about it at the same time. 😉 I’m excited to see where it goes. And it’s going to keep going, because in case you haven’t heard, we’ve already gotten season two! Woot! *confetti*

Looks like in next week’s episode, another horseman is coming, Plague. Join us then! Can’t wait to see how they play it.