***Movie Spoiler Alert!*** If you haven’t seen the movie and don’t want it to be spoiled, go watch it and come back. You won’t regret it. Awesome, awesome stuff.

People named Joe seem to be a powerful bunch of people. For once, I’m not talking about Joe Manganiello, though I really could talk about him alllll day long. This time, I’m talking about the Joes in Looper, a movie I watched about self-sacrifice. 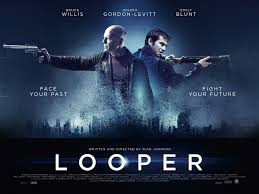 Now, I’m disappointed I missed the beginning of the film, because from what I’ve read, it’s brutal and creepy and freaking awesome. My best friend told me about the film a while ago, too. One of the Joes is Bruce Willis, and he goes by Old Joe.  The other Joe is Joseph Gordon-Levitt, so let’s have three cheers for hot Joes. 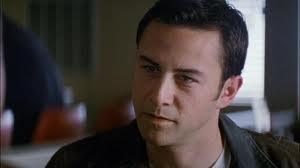 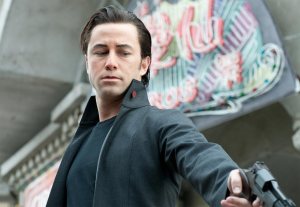 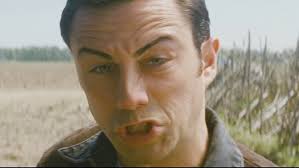 He’s like, the love child of Keanu Reeves and Ray Liotta. And even making that last face, I can deal.

But… there’s this telekinetic dude called the Rainmaker who is a real nasty guy. The loopers figure it’s best if he dies as a child. So back into time Old Joe goes (along with other hitmen) to find the child and kill him.

Young Joe meets Cid. And Cid’s powers… My God, I was so disturbed and floored by the concept of his powers that I just sat there, slack-jawed, and couldn’t stop thinking about it for hours. Here’s the thing with Cid. He’s super adorable. 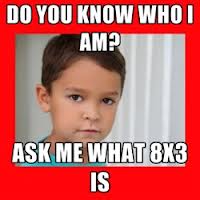 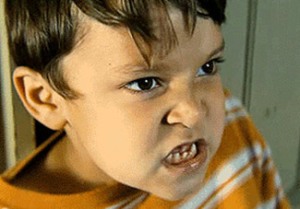 He’s called the Rainmaker because when he snaps – even just when he’s hurt, because he’s a child and has no control over his temper, he kind of… makes people explode. Their blood rains down, and it’s horrific.

Insert no picture here because it’s super gross. Watch the movie if you want to see.

So Old Joe finds the Rainmaker and gets ready to kill him. But Cid’s temper problem flares, and everything lifts into the air by the power of his telekinesis, including dirt and grass and Old Joe.

Young Joe sees this happening, and Cid’s mother whispers soothing words to him, calming his rage. It’s a mother’s love that teaches him to control his temper (at least for now), but Old Joe is still bent on killing Cid. So to close the loop and take Old Joe out of the picture, Young Joe turns his gun on himself and without hesitation, pulls the trigger.

Old Joe vanishes and Cid and his mother take off to start a new life. Will he still become the feared Rainmaker of the future? Who knows. One hopes not. But Young Joe sacrificed his life to take a chance on Cid, to trust that a mother’s love is powerful enough to soothe him and guide him onto a better path in life. 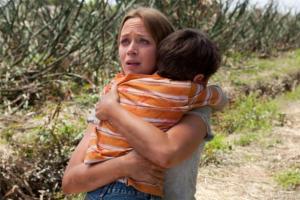 Of all the chaos and disturbery and Joes in this movie, what got me the most was Young Joe’s instantaneous pulling of the trigger. He just didn’t miss a beat. He saw that there was a chance he could prevent all the horror by sacrificing his life, so he did it. No questions about what he would get out of it, except the obvious answer that his Old Joe self wouldn’t have to endure all the pain of his life.

It struck me on such a deep level, I loved it, and I’m going to watch it again from the beginning so I can catch all the subtleties and gruesomeness of the loopers.

On a Biblical level, this movie reminded me of self-sacrifice. It’s all throughout the Bible, not only in the story of Christ. Human beings are constantly asked by God to sacrifice. Not necessarily the self, or the body, but ways of life and material things for the sake of others or the sake of prayer. It seems to be a key character trait of people who have strong influence in the world, and I’m reminded of our Pay It Forward project and all the enthusiasm from all of you when I decided to start doing some good deeds, and teaching my kids to do the same. The whole idea has caught on in my area like crazy – I’m not saying it’s because of anything I did, since it’s obviously not an original concept, but there’s even a radio commercial that says, “Calgary is paying it forward!” And they had a Calgary’s Pay It Forward day.   People are doing good things, sacrificing for others, and I love it. Check out their Facebook page HERE, and maybe some people could start a Pay It Forward day in other cities. Is there a Pay It Forward day in your city? I’d love to hear about it, if there is.

What situations/movies do you find yourself connecting with self-sacrifice, either in its gentler forms or more brutal? And have you seen Looper? Did it screw with your head as awesomely as it screwed with mine?!