← Guest Post by Daniele Lanzarotta
Has Fiction Lost its Faith? – Article via the New York Times →

I am an enormous fan of Orson Scott Card’s Ender’s Game series. I love his portrayal of vivid characters and I admire his use of religious themes in much of his work. When I picked up his novella, A War of Gifts: An Ender Story, I had no idea that I would truly be reading a Christmas story. 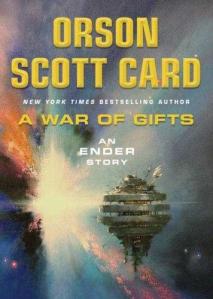 The story begins from the viewpoint of Zeck, the son of a minister, with a flawless memory – chosen for Battle School against his father’s wishes. Though Zeck does not wish to disappoint his father by attending a school his faith deems “impure,” the Battle School recruiters are relentless and eventually, he attends.

Religious expression is strictly forbidden in Battle School. But in a school full of geniuses, surely that can’t stop them, can it?

Flip, the Dutch kid, puts his shoes on the floor by his bed with the toes out on Sinterklaas Eve.

And thus, the children begin passing around a poem in friendly jest of those who practice holiday rituals in Battle School, and the poem becomes a method of gift giving.

Dink carved an “F” into Flip’s pancake in the morning after Sinterklaas Eve. A small gift… a token of friendship and mutual reminiscence of home… and a rebellion against the authorities who forbade them any soft recollection of the pasts and parents they left behind.

When they are caught, they use an excuse: it was not religious observance/expression but observance of a Dutch tradition. One child responds, “Nations don’t matter up here.” Another, “Religions, neither.” But the exchange sparks a conversation, and pretty soon the children tell of their personal Sinterklaases – Santa Clause, Saint Nick, Father Christmas, Papa Noel, and they include Muslim prayer-time observance in their thoughts on religious expression, too. And the rebellion spreads as children pass around old socks to wear in protest of the ban on religious – and homesick – expression.

I won’t tell you the end of the book, but this novella by Orson Scott Card serves such a wonderful purpose… to show that freedom to express one religion does not devalue another, that refusing to speak of religion doesn’t make the problems or conflicts disappear. The kids in Battle School unite against the oppressive authorities to show that they still cherish the values they were taught as kids at home, and that regardless of what they believe and strive for as soldiers, those lessons never go away. They fought against a common enemy peaceably and expressed their beliefs without devaluing anybody else’s. 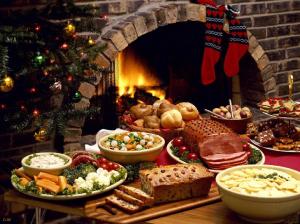 This holiday season… whatever you celebrate… remember that one saying “Happy Holidays” is not insulting your Christmas and one saying “Merry Christmas” is not insulting your Chanukah. We are all saying the same thing… “Unite with love against the brewing of hate and oppression. Love your neighbor, love your spirit and celebrate those things that make us all human and unique.” Just because it is said in a different tongue than that which you speak does not mean the speaker intends to hurt you… rather to share the joy they feel in the language they know. Express it back in the language you know!

← Guest Post by Daniele Lanzarotta
Has Fiction Lost its Faith? – Article via the New York Times →